Before moving on to TCP/IP, it is important to know how network protocols are organized. In order to ensure communication across different systems, there is the OSI model. Here, narrowly defined tasks are defined for each layer. Network protocols defined in a layer with clear interfaces are easily interchangeable.

. Divided into 7 layers (layer), the various protocols are classified according to their tasks and functions. 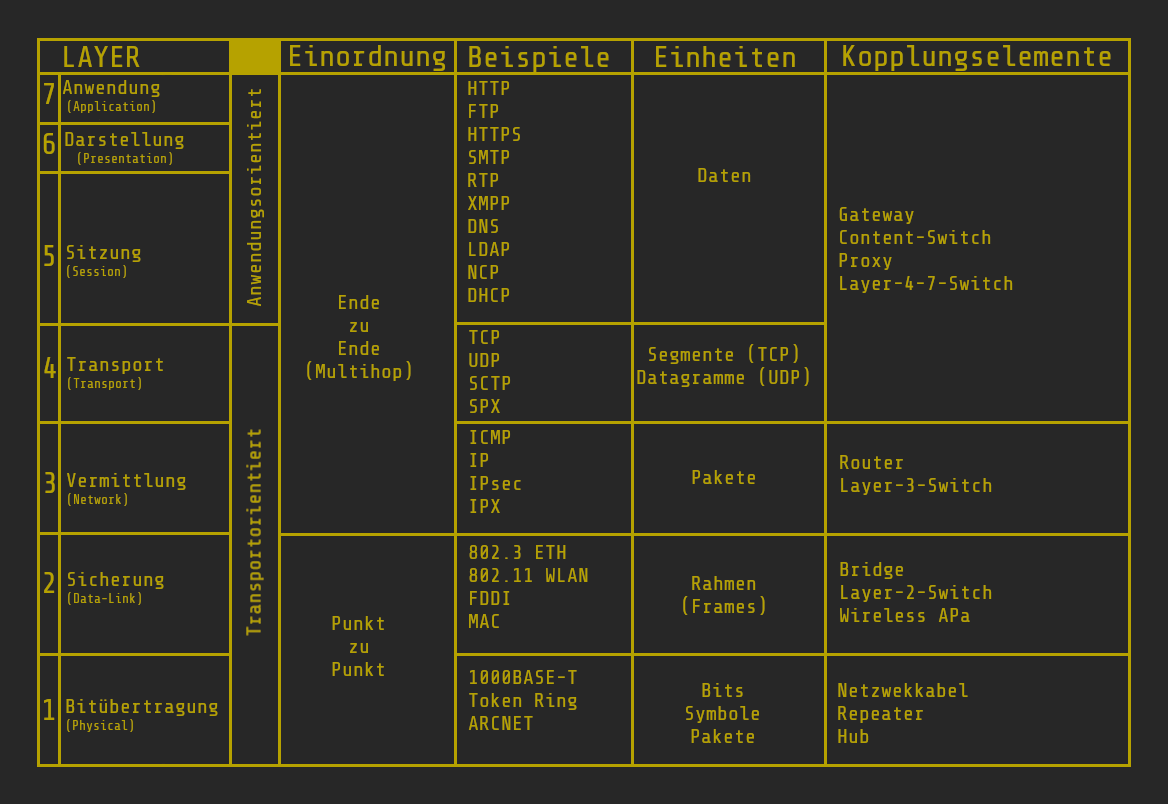 In networks, various services of different types are provided to clients. To ensure the communication of both clients, a variety of tasks, in terms of reliability, security, efficiency, etc., must be managed. Starting with the simple signal up to the complex processing for applications. Due to the high number of tasks, the OSI model was introduced and divided into seven layers. On each layer the requirements are implemented separately. The instances must work on both sides (sender and receiver) according to the same fixed rules. These rules are recorded as a protocol and are defined by the logical horizontal connection of two instances in a layer. Each instance provides services that can be used by the instance above it. The real data flow therefore takes place vertically.

Layer-1 is the lowest layer. This layer provides the physical components for mechanical, electrical, or other types of data transmission. When activated, it maintains or deactivates the connections and transmits bits over them. The types of signals range from sound to electromagnetic waves, optical signals to electrical signals. Devices or network components that belong to Layer-1 are e.g:

Layer-2 takes care of the largely error-free transmission of data and regulates access to the transmission medium. Here, bit streams are divided into blocks (frames) and checksums are assigned to the blocks so that the receiver can reject or correct erroneous blocks. The data flow control in layer 2 allows the receiver to control the speed at which the other side may send its blocks. Hardware used in this layer includes bridges and switches (multiport bridges).

Layer-3 handles the switching of connections (for performance-oriented services) and the forwarding of packets (for packet-oriented services). Data transmission here takes place over the entire communications network, including routing between the network nodes. If the sender and receiver are not directly connected to each other, the packets are forwarded at the same layer and do not reach upper layers. This happens from node to node until the receiver is reached. The network layer also takes care of the provision of cross-network addresses, the associated routing and the creation and updating of routing tables. This is why the Internet Protocol (IP) and NSAP addresses are also found here, as these are needed to ensure routing. On the hardware side, Layer 3 is handled by routers and Layer 3 switches.

Layer-4 provides for the segmentation of the data stream or for its division in order to ensure a constant data stream. Layer-4 also provides uniform access to data streams for Layer-5 through Layer-7.

. This layer takes over the control of logical connections, i.e. it takes care of the process communication between two connections. This results in a stable connection that is realized by fixed points. At these fixed points, a session can be resynchronized after the failure of a transport connection without having to start from the beginning.

Here all applications and services of the end users are found again (web browser, mail, instant messaging, etc.) but also the network management. In addition, the files and output takes place on Layer-7.

So far the structure of the OSI model. This should help you to locate where what happens in the network traffic and brings the first basis for understanding TCP/IP (which will follow here).