The DevTerm keeps popping up at my feet at regular intervals. It's beautiful but it comes at a price - $339 is a bit much for a toy and not in the budget here. If you don't have the budget, you'll probably have to build it yourself. Devterm didn't invent the form factor. There were various old "notebooks" that also had a display at the top and a keyboard at the bottom. There was also the EPSON HX-20, TANDY 102 or the AMSTRAD NC100. I was able to get hold of the latter on EBay and it was even affordable.
The NC100 now has rather unusable hardware installed. So the idea of turning the device into a cyberdeck came very close. I have to say I'm not a big vintage computer collector, I like hardware that I can use and I hope forgive the vintage nerds disassembling the AMSTRAD NC100. So what should happen to make the AMSTRAD NC100 more usable?

The rough timetable of everything that should go into the Cyberdeck and what it should be able to do:

PRE
These are the rough key points.
The greatest effort is probably in adapting the case to the requirements. In contrast to the OMNIBOOK 425, which is also lying around here, the NC100 is clear easier to open and most importantly the display is easier to remove.
But before a lot of individual parts can be ordered and tinkered wildly, a little more planning is needed.
Let's start with the display. The old LCD display is beautiful from a nostalgic point of view, but a little more color and Resolution would be great. Inspired by the DevTerm, I searched through the various shopping platforms and came across a display that fits perfectly. It's an 8.8" display with a resolution of 1920px x 480px. So a slightly different format. The display comes with its own board that is connected to the Raspberry Pi via HDMI and controls the signal.
The all-rounder Raspberry Pi is used as the computer. Then comes the beloved NixOS with XMonad and Xmobar. Now the Raspberry Pi is somewhat loose in the Case of the Amstrad. So it makes sense to put the ports on the outside. The RJ54 connector is placed on the left side of the Amstrad via a built-in socket and three USB ports on the top. The keyboard is a CRKBD / CORNE. However, not in the actual sense of use but as a unibody split. I save myself the handwiring out of laziness and use the CRKBD PCBs instead. Kailh Choc browns come on the board as switches and first unlabeled compatible caps.
So much for the preliminary considerations. So we have a part list that looks like this:

The Amstrad is very easy to disassemble.
All you have to do is loosen the 5 screws on the bottom of the device. Three of them are directly on the bottom of the case. Another is for the flap under which lies the beautiful Amstrad chip and the last screw is hidden in the battery compartment.

When you have loosened all the screws and can open the Amstrad, the wonderful world of vintage computer mainboards is in front of you. Nevertheless, caution is advised. On the mainboard of the NC100, the display and speaker are connected by plugs or ribbon cables. If you don't want to just rip this off, lift the lid with caution, there's plenty of room to maneuver, but be careful. You can unplug or pull them out and you can separate the two halves. You can also remove the keyboard directly after unplugging it.

Now that the Amstrad is disassembled, all the innards can be removed and we have the opportunity to measure everything that is crucial for our further planning. Let's start with what I know. The keyboard. As mentioned above, a CRKBD/CORNE is coming into the Amstrad. One of my favorite split keyboards. A quick test by placing the PCBs shows that the CORNE could fit into the case. But it would be too easy if everything went smoothly. The two halves of the CORNE are usually connected using a TRRS cable. Now the two PCBs are relatively close to each other, so unfortunately the possibility of using a TRRS cable is no longer available. Not that bad - just wired directly. Now the PCBs should not only lie loosely in the Amstrad, they should also look good. That's why there is a chic 3D printed switchplate. But for that you need the dimensions again: 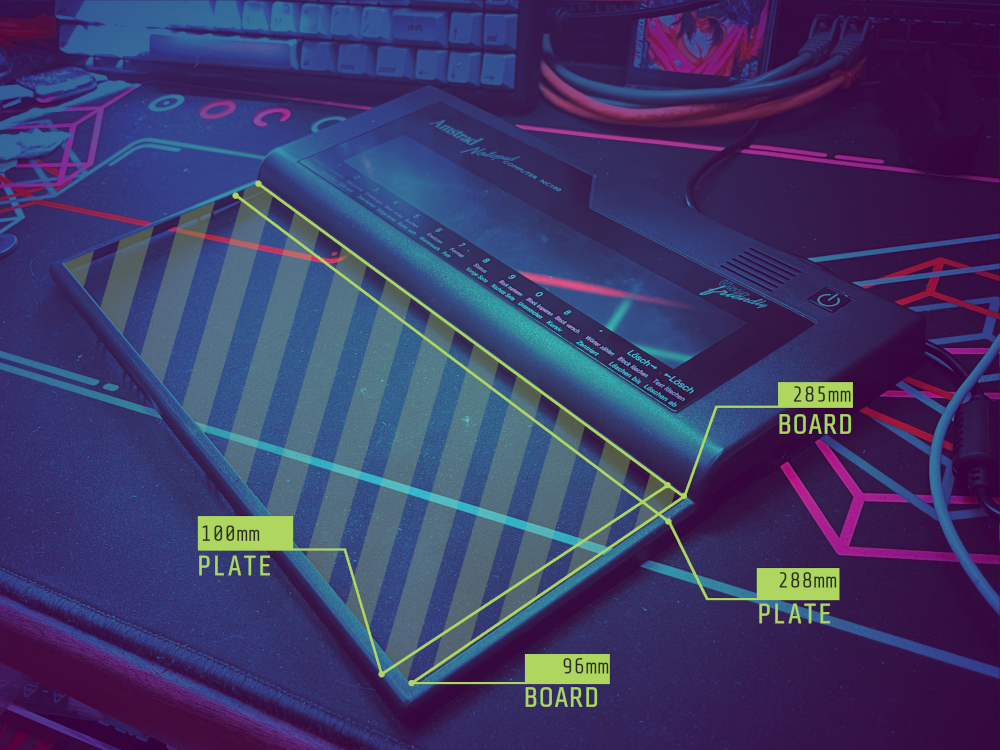 The plate can easily be placed under the frame. It is 1.5mm at the top and bottom and 2mm on the right and left. The keyboard has a space of 285mm x 96mm on the surface. The plate itself has the dimensions of 288mm x 100mm. Since I'm a 00 at designing plates, PCBs or 3D printable models. I asked around a bit. Unfortunately, there is no plate that arranges the PCBs horizontally by default. So I had to familiarize myself with the design of plates. A few Discord users were able to help me. Thanks here to mini-e industry plant and M4NU for tips and help. But Frank also offered me help. That's how I discovered the QCAD tool and it makes it very easy to design a plate with millimeter precision. Now I've taken all the measurements and have an almost finished design for the plate. Nearly. What is still missing is the height of the plate. To do this, the original keyboard of the Amstrad is measured first. That is 7mm high. That is not much. Luckily I have one or the other CORNE here as a comparison that I can use to measure whether everything fits.

Let's continue with the display. The outer dimensions of the display are 231mm x 65mm. So slightly larger than the original LCD display. That means the lid of the Amstrad has to be modified. It is advisable to remove the panel that the Amstrad has on the lid. This works great with a hair dryer. When the aperture is removed, it can be wonderfully measured again. The display fits into the small offset that the bezel sits on.

When everything is measured so that we can order the 3D parts, we get down to business. The case is the beginning. Space is very limited in the NB100 case. Therefore, the battery compartment and access to the Amstrad chip inside must be removed. Here the first vintage computer enthusiasts will scream loudly, because here plastic is removed and irretrievably. When all unnecessary plastic is removed, the flap for the Amstrad chip is glued and the The cover for the battery compartment is simply attached. The underside of the NB100 is chic and it can look a bit wild on the inside.

Next comes the top of the case. Here (after some checking whether the installation height is correct) the keyboard switchplate is glued in. It fits perfectly in the place where the keyboard used to be. But the plate isn't the only thing. The NB100 has a wheel on the right side that is used to adjust the brightness. This is where we place our RJ45 jack. To do this, however, a piece of the case must be removed. The best way to do this is with an old-school hacksaw. Here we have reached the first milestone. The case is finished and ready to use. However, the old anthracite should give way to a beautiful black. So let's start painting. So find a place with plenty of space and unpack the paint cans. With black, this is done relatively quickly. Let dry. Now there should be two pretty purple stripes on it, i.e. tape everything well, so that only the stripes become purple and paint over them with purple. 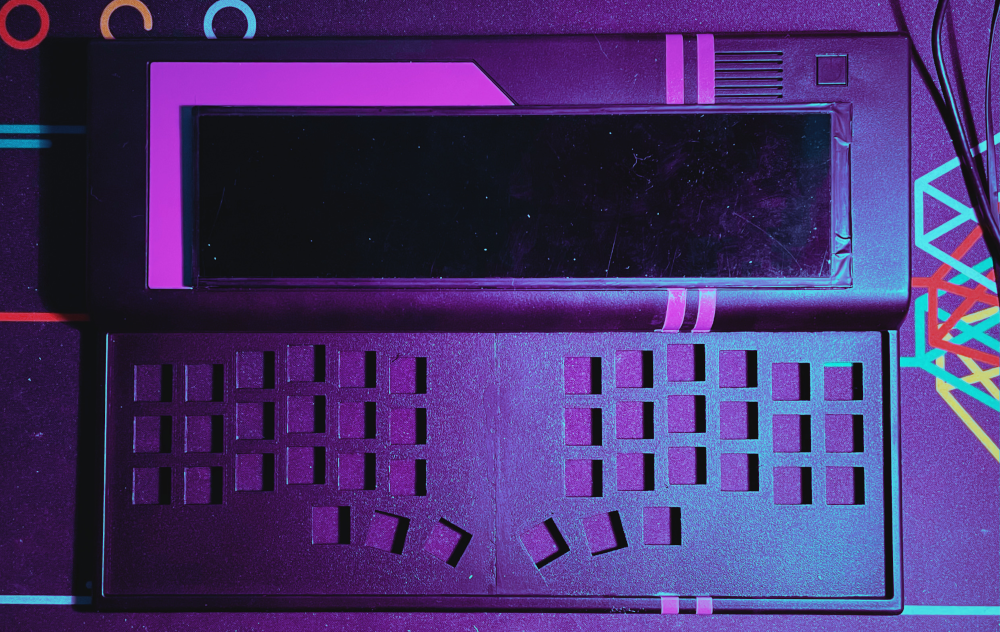 When everything has dried well, the case is finally finished. Now comes the innards and the keyboard.

The keyboard is a little different than if the CORNE were built as a separate stand-alone board. First the diodes are soldered onto the PCBs. In this case SOD-123FL SMD diodes. However, they come on the underside of the PCBs. After the diodes are soldered, the microcontrollers are soldered. However, the microcontroller does not come directly onto the PCBs, otherwise the installation height will no longer fit and the keyboard will no longer fit into the case. So cables come to the PCBs and then to the appropriate pins on the microcontroller. A somewhat unusual way, but we don't do anything to save a few millimeters. The important thing is that the microcontrollers must be isolated so that unwanted short circuits do not occur. It's a bit cumbersome but necessary. When that's done, the two halves are joined together. Of course, there is also no space for TRRS sockets, so wire directly. As a penultimate step, the board is tested before it is installed. Nothing is more annoying than building a keyboard without testing it first. So flash the keyboard with the wonderful QMK:
The keyboard is tested with tweezers and a tool that shows me all the keystrokes. If everything works with the keyboard, it can be put in the case and the switches are soldered. With that, the keyboard would be completely installed and ready for use.

The display comes directly onto the frame that held the bezel. With a few small dots of glue, the whole thing is fixed on the lid. However, since the display does not fill the entire width of the recess, we cut a small section out of it, paint the whole thing purple and glue it Cover then back in place. Even if it is obvious, the best way to mount the display is without hanging it on the PCB.

In the next step we will install the ports. On the one hand there are the two power ports on the top of the case, the RJ45 on the right side and the two USB ports on the left. Here our dealer comes into action again and prints a pair of screens for us so that the whole thing looks pretty. The NB100 still has a slot that has no use, so it is simply closed.

The bezels are glued to the bottom of the case, but not to the top. So we can open the case later without anything having to tear it apart.

Now that all the external components have been installed, the wiring can begin. In the first step of the cabling, USB and microUSB sockets are attached to the panels screwed. Storing the cables in the housing is not that easy. The cables and the Raspberry Pi go into the case. The micro-USB cable for the keyboard goes to the Raspberry Pi, the Network cable and the circuit board for the display is connected to the power port. Now the top of the case can be put on top. Both of them have to Microcontroller to be somehow pushed between the other cables. If you have succeeded, the keyboard can be connected to the Raspberry Pi. Now that the majority is wired, the 4 screws come back into the housing and fix the whole thing again. When everything is in place - the display comes. The display is glued into the recess of the top BUT! previously connected to the circuit board with the ribbon cable. 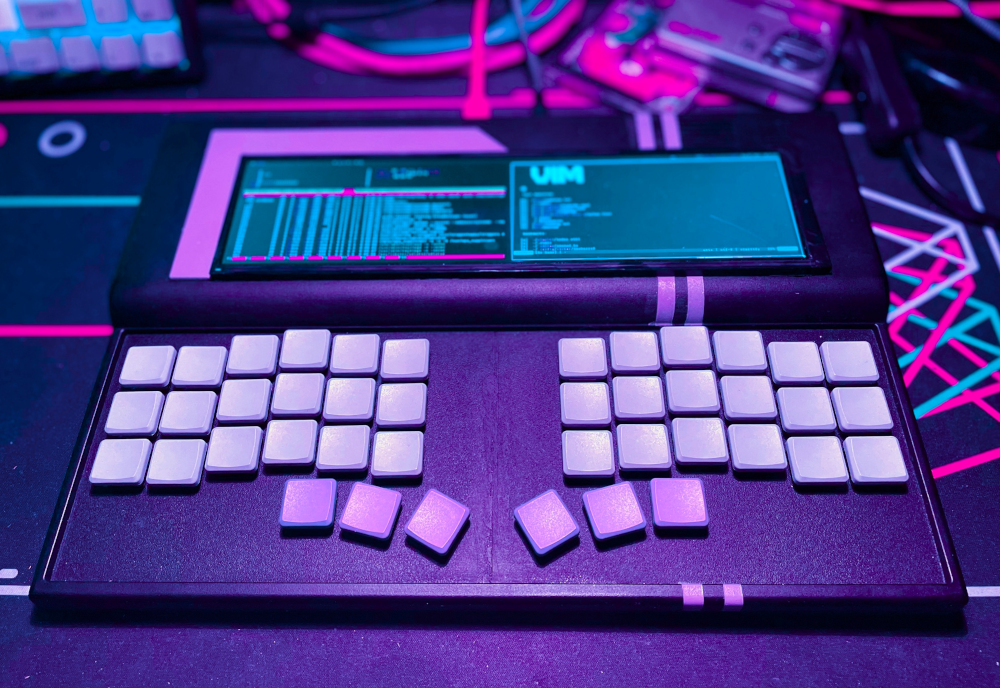